On June the 15th, we organised a fundraising event for local woman Helen Fincham to help to raise money to fund her rehab. Helen was diagnosed with Transverse Myelitis in 2016 after she woke up paralysed from the neck down.

Transverse Myelitis is an inflammation of the spinal cord which can lead paralysis. It affects everyone differently and recovery can take up to 2 years. Helen regained some movement in her upper limbs but the condition had left Helen with paralysis in her lower limbs. Helen had made contact with us after her discharge from hospital and had been coming in to the clinic to use our FES bike. 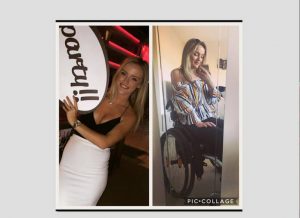 We decided to get a fundraising event organised for Helen to help her to buy equipment that could help her on her rehabilitation path and to increase her independence.

The event kicked off on the 15th June at Tondu Cricket club and we filled a capacity of 200 seats! The Fountain Restuarant, Aberkenfig put on a tasty hog roast and we had a talented local singer and DJ lined up for the entertainment. We hosted an auction which included prizes such as a signed football shirt from Goalkeeper Jordan Pickford, a spa day for 2 at the Heronston Hotel and a voucher for eyebrow microblading worth over £200.

Thanks to everyone’s generous donations the event raised approx £6100 for Helen, we could not have predicted such a large sum. No doubt this will help Helen to achieve her rehabilitation goals. 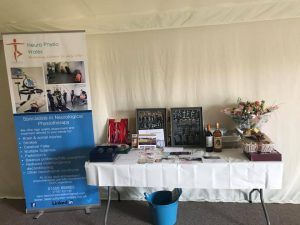 Our prize table at the fundraiser 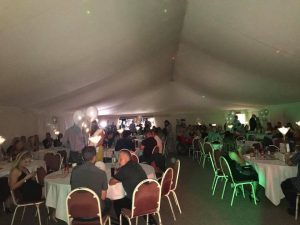 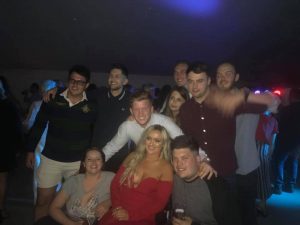 Helen with her friends the the fundraiser