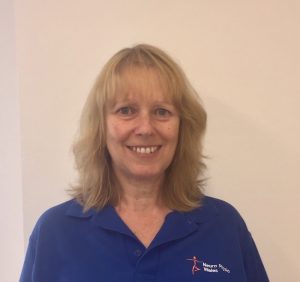 ‘Pauline qualified as a Physiotherapist at the Queen Elizabeth School of Physiotherapy in 1983 and for the majority of her career in the NHS she has specialised in treating elderly people with multiple problems so works holistically on the whole body.

She began work in Boston, Lincolnshire, where she completed her Bobath training and helped set up one of the first stroke units in the country. She then worked in outpatient field specialising in Hydrotherapy and Neuro outpatients. On moving to Bridgend in 1999, she worked as team lead for the inpatient care of the elderly Physiotherapy team and the Pendre medical day unit.

Since then she has specialised in falls prevention including vestibular rehabilitation and Parkinson’s disease. She worked with the multidisciplinary team to develop the multifactorial, multidisciplinary falls assessments for the patients in Pendre to provide what many people described as a “one stop shop’ which avoided multiple visits to different departments.

Pauline explained “It was amazing to see the change in people as they got stronger and their balance improved following our exercise classes; they gained in confidence and often returned to activities they hadn’t managed to do for years.”

In addition, she was one of the first Physiotherapists in Wales to train as a PD Warrior instructor and to use the exercises and the principles both with individuals and in the PD education groups that she ran with the PD nurse specialist in Pendre day unit.

“I am now looking forward to using my expertise within the private setting at Neuro Physio Wales."