Parkinson’s disease is a neurological disorder caused by a lack of dopamine because some of the nerve cells producing the chemical have died.

The cause of the disease is unknown at present, but researchers think it could be due to a combination of environmental and genetic factors, causing the dopamine producing cells to start to die.

Symptoms can vary, but the most common ones are tremor-shaking at rest, slowness of movement and rigidity (muscle symptoms).

High intensity neuro-active exercises are essential in slowing down the progression and relieving symptoms of Parkinson's disease.

A physiotherapy assessment will look at how Parkinson’s is affecting your life and your movement. This could include: 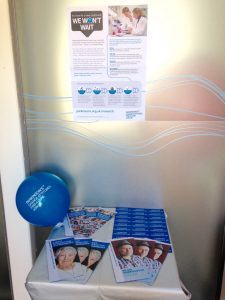 Fundraising at the clinic for Parkinson's Awareness Week

Chartered Society of Physiotherapy on Parkinson's